The idea that you could catch cold sores from using makeup samples at a store may sound like the stuff of beauty urban legend, but that’s exactly what a new lawsuit is claiming: the New York Daily News reports that a woman in California is suing Sephora, alleging that after trying an in-store lipstick tester in 2015, she was later diagnosed with oral herpes, commonly called cold sores, typically caused by the herpes simplex virus type 1 (HSV-1).

It’s not clear how the woman concluded the lipstick tester was the cause—and not, say, kissing someone with the virus. Although it’s a lifelong infection, it’s very common (more than half the adult population in the U.S. is thought to have oral herpes), and there are now products designed to help prevent cold sore outbreaks and/or speed healing (such as the lip care gel Lipivir and the Polysporin Cold Sore Healing Patch).

But never mind the legal merits of this one case. Our inner germaphobe really wants to know: is it possible to get cold sores from sharing a beauty product anyhow?

Reality check: “The risk [of catching herpes from makeup testers] is minuscule to little to none,” says Dr. Sandy Skotnicki, assistant professor of dermatology and occupational health at the University of Toronto, and medical director at the Bay Dermatology Centre.

Yes, it’s possible for the herpes virus to survive without human cells, but only for a few short hours, if that, explains Dr. Skotnicki. “Herpes is a human infection and needs human cells to survive and replicate or it dies.” As for the California lawsuit, Dr. Skotnicki says, “I think putting news like that out there just incites fear for no reason. This person who got herpes—there’s a high chance she could have gotten it from someone else.”

Nevertheless, Dr. Skotnicki urges people to handle makeup testers with caution—especially lip, eye and pot-packaged products—as there’s always going to be a theoretical risk when it comes to using samples available for anyone and everyone to touch.

In fact, an old two-year study that tested samples at various makeup counters found that 67 to 100 percent (!) of the products showed at least some level of bacterial contamination. Still want to swatch in stores? We spoke with Dionne Gesink, associate professor of epidemiology at the University of Toronto’s Dalla Lana School of Public Health, to get her advice on how to handle makeup testers. Here’s what she had to say:

Lip products: Never swipe these right on your lips. At the very least, “you’re more likely to catch a cold if you’re going to exchange fluids that way, especially during flu season,” says Gesink. “Instead [swatch the product] on the back of your hand to check the colour, or get an associate to clean it with alcohol, and then, using a disposable applicator, apply it on your lips.” FYI: the same rule applies when sharing lip products with friends, she insists.

Eyeliner: “You have to be careful about pinkeye [a.k.a. conjunctivitis, which can be caused by viral or bacterial infection] if you’re going to try an eyeliner tester. Again, try it out on your hand instead of around your eye,” says Gesink. “I honestly just don’t recommend testing out an eyeliner until you’ve actually purchased it. You don’t want to mess with your eyes—you never want to risk it.”

Mascara: “Using a disposable brush is a safer way to test a mascara—but it’s not 100 percent [safe], especially when customers double-dip back into the tube,” says Gesink. (Yikes!) Yes, theoretically, if every single customer used their own individual spoolie for every single dip, the tester should be fine. But since there’s no way to know for sure, we’ll wait to test the product we’ve bought.

Potted creams: When you dip your fingers right into a jar of face cream, you introduce any germs on your skin into the product. “Get an associate’s help—they should be using little spoons or sticks if they’re pulling a sample from a pot,” says Gesink. You should do the same at home, too: use a fresh Q-tip (or something similar) to scoop out a dollop, so you don’t sully your skincare. 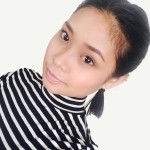